Before getting started I would like to address one statement that needs to stop being said.

Ahem.  Let me clear my throat.

Something cannot arbitrarily weigh more than something else.  The amount of people in our industry that say this is embarrassing, and we’re better than that.  Yes, muscle is certainly more dense and compacted than fat but it cannot just weigh the same because it is absolute, not relative.

Thank you.  I feel much better.  Now onto why I encourage you do ditch the daily weigh-ins.

If I became Commander of Chief of Fitness for just 10 minutes I would make sure that in my supreme list of final verdicts I would eradicate the use of a daily weigh-in as a determination of progress.  While a scale can serve a good purpose as a very baseline indicator of weight management, more often than not I’ve witnessed them turn otherwise sane and logical people into obsessed freaks who weigh themselves eighteen times a day until they finally lose it and drop a fierce ax kick on that be-yotch.

The scale is okay as a very rudimentary way to measure if your body composition may be changing.  Certainly, if you are very overweight (by at least 30 pounds), the scale will be a good indicator of fat loss as mostly likely all the weight you lose will be fat, initially.

However, there will come a time when you will need to or are already incorporating weight training to your program and that’s where it doesn’t tell the whole story.

Not by a long shot.

It’s basically pulling a Jerry Sandusky, giving you absolutely minimum information, admitting to nothing you want to here and ultimately leaving you never wanting it in your sight again…and possibly dead.

If the goal is just to strip away pure fat and pay no attention to muscle mass, then sure, knock yourself out on the scale until you become destroyed from too much cardio, and possibly develop that skinny fat look where your body isn’t sure if you area skinny fat guy or a fat skinny guy.

I would recommend another program altogether since the real drive of health is the amount of lean body mass (LBM) you contain, and that’s where the scale fails since,

a) there is no button the measure strength increase.  You can double your strength while not having the scale drop an ounce.

b) it does not reflect a trade off of fat for muscle.  You could lose ten pound of fat and replace it with ten pounds of muscle, a completely common occurrence if you are weight training, and according to your weigh-in you would not have made any progress.

This is not to say you need to go out and turn yourself Arnold, but development and maintenance of some muscle is very beneficial.  LBM drives metabolism, makes us more athletic, has proven to be an accurate predictor of long-term health, makes us feel better and just plain makes you look better in your birthday suit.

(According to any scale, Arnold would have been classified as ‘morbidly obese’ meaning so fat he is on the verge of death, when in reality he was around 3% body fat in his prime and considered to be the most proportionate specimen to ever live.)

Additionally, your body can fluctuate as much as three to five pounds in a given day just by regular metabolic processes, glycogen depletion and replenishment, water weight retention and that time of the month if you are a woman.  So, if you weighed yourself on Monday morning and read 135 you could very easily go back Tuesday night and have it read 140.

Would you honestly believe you would put on five pounds of fat in 24 hours while maintaining an intense exercise program?

I hope not, and this is my beef.  The craziness of that number driving you Gary Busey has removed all sense and logic that you would normally posses.  Often times, that frustration gets people to quit when they are actually making amazing progress!

It’s why I don’t keep a scale in the gym, weigh myself about once a quarter and don’t give my body weight a moment’s second thought.  I am far more concerned with how I feel carrying my weight and how I perform physically.  If my weight allows me to train hard four times per week then I have a good shot at maintaining long-term health.  And that’s my goal

Check out this lady below who, according to her scale, is yet to “make progress”. 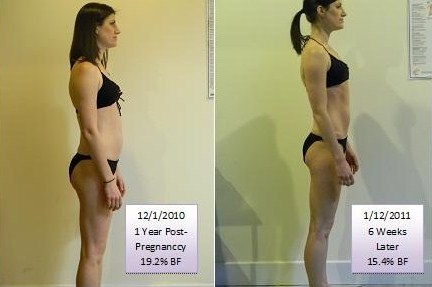 Same net total weight yet dramatic reduction in body fat percentage and most likely jean size (for all you ‘fitting into your skinny jeans obsessed’ women out there.  And I know there’s like a million of you.)

She has added muscle and removed fat yet weighs the exact same.

I love reading the likes of Nia Shanks, Girls Gone Strong and Marianne Kane because they have a great message that tends to focus not on reducing the negatives (fat) but improving the positives (strength).  When you have that shift in focus the good tends take care of the bad on its own and you keep yourself positive and sane in the process.

The take home message is that using a scale is fine as you start out but only if you do not obsess over it and understand that your body can be altered dramatically without so much as a hint from that pesky fella in the bathroom.

One of my clients checks in about once every 30 days and that’s what I would recommend.  She has lost 50 pounds over the course of six months and surely kept her sanity in the process.  She is also a grandmother and can deadlift 205#.

And lastly, if you are more of a visual believer which one do you think has the higher net weight on a scale?

Yep, the one on the right…her scale probably told her she was “getting fatter” when developing that thing.