A quick note:  I am slowly migrating over to Twitter over the course of the next few months so please do me a favor, make me look cool and follow me here!

This has been an exciting week as what has happened?

Yyyeeppp, that’s the start of Spring Training games and the return of baseball.  If Spring doesn’t get you going and thought of opening day in approximately a month then you must also dislike Apple Pie, American Cheese, Daisy Dukes, Cadillacs, Monopoly and Golden Retrievers.

Additionally, the Colts have released Peyton Manning which means my Redskins should be making the 36 year old who was out with a spine last year a $25 million offer any day now.

I got to thinking about potential blog topics the other day since I’ve hit a bit of a creative rut and I began thinking about what some of our most successful gym members at Performance360 have in common.  Then I started recollecting on my days in the mega gyms and what I personally learned from some of the other folks.  I was lucky enough to train in one of the only legit mega gyms in San Diego (World’s Gym) and learned a TON from my surroundings.

For some, it includes weight loss of up to 45 pounds, deadlifting 450# or a woman doing a one-rep pull-up.  Whatever.  The goal is irrelevant for the sake of this post.

Here are five tips to take your results to the next level.

This one is huge and the most overlooked part of training.  To me, this separates ‘working out’ from ‘training’.  When you are are training you have a goal that is reached through a series of small accomplishments along the way.  Marathon runners, so I am told, use a series of checkpoints to measure their progress. They don’t just bust it out of the gates and think only of 26.1.

If you are not keeping track of your progress on the major movements then you might as well be getting into a car with Helen Keller.

Record what you did on squats, how fast you ran your most recent three miles in preparation for your race, your most recent three-rep max on deadlifts, how close you were to a pull-up. Whatever.  The point is just to write it down so when you go back and attempt the same thing a week later you have a reference point.

Otherwise there is never any progress.  It’s all just a collection of exercises on random days.

Which is the perfect segue for….

Don’t Try to Be the Best at Exercising

If you are just blinding going to the gym and doing a little of this, a little of that, some arm thingys, 17 sets of bench press or 45 light years on the elliptical than I have news for you.

You’re just getting better at exercising.

On the other hand if you have an explicit goal that you have written on a post-it in your cube, “lose 15 pounds by June 1″…”beat my boyfriend in arm wrestling”….”deadlift two times body weight”…”take my boss’ lunch money”…you are far more inclined to reach it.

You’ll be more motivated to research the best methods for your goal, watch proper videos to learn new lifts and execute a systematic game plan to reach that goal.

Research shows this.  Common sense shows this and thousands of fat people still slaving away on the recumbent stationary bike shows this.

Your training motivation should be more for intrinsic than just to get better at everything. Seeking well-roundedness is a great concept but you need to define what that consists of for you personally.   If you are going to the gym to just get better at the things you do in the gym, something is off and you need to step back and channel your inner Kenny Powers.

Triathlons are actually a great goal and precisely my point.  This video is just hilarious to me and serves as a great larger point not to jog aimlessly.  Have a tangible goal.  Get your deadlift to twice body weight rather than just “mixing it in”.  Train for a race rather than “do cardio”.  Like I said, don’t try to be the best at exercising.

You don’t have to be prepping to run a sub 4.4 in the NFL combine to label your efforts as ‘training’.

Unless you are a hermit who knocks out pull-ups in the pitch black basement or have a fully functional home circuit gym, then chances are you go to a gym and see a lot of people whenever you train.

Chances are also high that you see the same people since you probably go at a fairly routine time.

Annnnd, chances are strong to quite strong there are people there you secretly look up to, Photoshop your head on their body and want to be.

Well, zone in on that person and stalk the shit out of them one day.  Creep behind columns, look at them from far distances, take note of their exercises, compile strands of their hair for…wait, what?

While it’s true that some lucky people have the gift of incredible genetics and don’t have to work as hard as the rest of us for their results, the most likely scenario is that person you wish you could be got their results through a well thought out game plan and a ton of blood, sweat and tears.  Chances are they go to the gym when it’ cold out, they work legs if their shoulder is acting up and they don’t drink 450 calorie Starbuck’s drinks.

What exercises are they doing?  Are they lifting heavy weight or light weight?  Do they stay on the exact same level of difficulty day in and day out?  What’s their pace like in the gym?  How long are they in there?  Do they perform complex movements like squats, deadlifts and presses?  Are they spending more time chatting or kicking ass?

I learned a ton from watching those who were well beyond me when I was at World’s, both from trainers and average Joe’s alike and it made me both a better coach and lifter.

You’re never too good to pick something up from someone else and if you are starting out on your quest of awesomeness then soak up everything you can from those who already have the results you want.

Don’t be afraid to ask that person a tip or two, either.  So long as they are not in the middle of picking up a small car, there is absolutely nothing wrong with kindly approaching someone and asking for advice. Chances are they will take it as a compliment and happily answer.

Don’t be scared to channel the Walker Texas Ranger that lives inside all of us.  From opening our gym and seeing folks train here for almost a year I am certain of one thing.

No matter the gender, race, age or fitness level, we all have a miniature Chuck Norris inside waiting to unleash a scorching, flame-engulfed round house kick of red, white and blue to the face of weakness, complacency, Somali pirates and boredom. 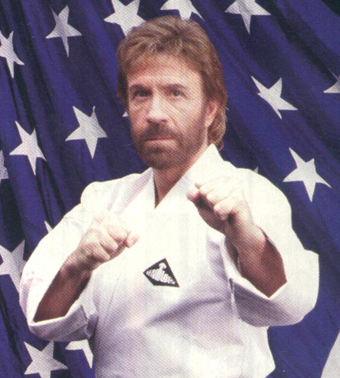 It’s just a matter of trusting yourself and having confidence.  You don’t have to be a professional athlete to posses work ethic and the desire to push yourself to personal limit.

Hard work is relative.  You don’t have to do what the guy next to you can do when squatting.  You have to do output your maximum individual effort which absolutely anyone can do.

I am positive that the number one reason the cardio section is always filled at all hours of the day is because it is safe, steady and low risk of embarrassment.  There is no risk of looking like a donkey when jogging at five miles per hour for forty five minutes, but if you get over and do some heavy lunges then you might make a weird face while, gasp….trying!?!?!!?

Attack your workouts and embrace what is challenging.  Go in with the intention of ripping heads off.

After all, the most demanding exercises tend to get the best results in the shortest amount of time so step away from the tricep pushdown machine and get underneath the barbell for some squats.

I have written about this before but you are not doing yourself any favors by demolishing yourself six days a week.  Give yourself some planned rest and stick to four or five days per week.  If you never give yourself a chance to recover than you’ll never have time to receive the benefits of the training.

You’ll just be in Charlie Sheen Zone, a constant state of repair and damage control.  So put down the barbell and let your body get back to homeostasis.  You’ll train harder the next day and get much more return on your investment.

So that’s it.  Five tips to start getting better at reaching your goals in 2012.